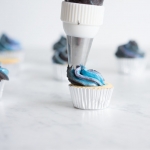 By: Erin from Cloudy Kitchen

I made these wee things ages ago for a friend’s studio opening and they were a giant hit. I had seen something similar on the internet a while back and decided to give it a try! They would be amazing for a children’s birthday party, or anything space themed.

The first time that we made them, the recipe went hard on black food coloring until everyone who ate a cupcake ended up with black teeth. Thankfully nobody minded. However I have tweaked the recipe slightly, using black cocoa powder in the black part of the icing rather than food coloring.

I went with a vanilla cupcake and an american buttercream. Normally I would use a swiss meringue buttercream for cupcakes, but I find that it never holds really vibrant colors as well as american, and for this I wanted them bright and strong. I made two batches of buttercream – one with the black cocoa, and one plain batch, which I divided into three and colored with two shades of blue, and purple.

Once they were piped, I covered them in flecks of white food coloring to represent “stars” – I just used my finger dipped in the coloring and flicked it on with my finger. I then sprinkled on a small amount of food safe glitter to give it a little sparkle.