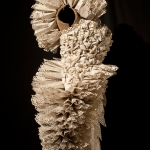 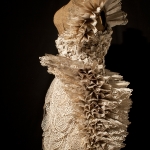 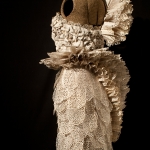 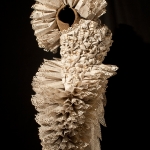 When I came across a box of fifty free romance novels at the library where I worked, I initially had no idea what I to do with them. But something within them spoke to me, and I knew I had to take them. Otherwise, I would wake up with a brilliant, life-changing idea and be devastated that I didn’t have them. So naturally, into the trunk of my car they went.
I cannot recall exactly when or how it occurred to me to make dresses out of the books, but the idea didn’t arrive in that brilliant and life-changing flash I expected. Rather, it was a slow piecing together of several ideas. Creating dresses out of romance novels enabled me to explore milestones of my own womanhood. For instance, while trying on wedding dresses, all I could think about was how I could recreate different aspects of dresses in paper. I knew at some point I wanted to create a wedding dress out of books, a feat I feared near impossible due to the fragile nature of the material.
However, the meaning of the wedding dress transformed when I lost my grandmother three months later. I began to make a dress shortly after her death, but the original intention of the piece changed when I somehow sensed that she was having trouble leaving this world. I
started to wonder, “if you knew you were going to die, what would you wear into the next life?” And at that point, my dresses took on lives of their own. They swelled to become wedding dresses on steroids, transforming into garments for ethereal queens, part floating dream, part regal mystery, part cyclical prayer.