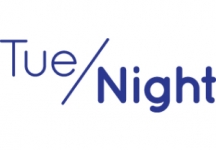 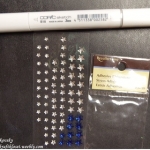 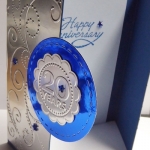 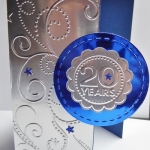 I made my husband an extra special 20th Anniversary card made from 6×10” dark blue cardstock, silver foiled cardstock, and a swirled embossing folder for some extra special texture. This design is called a Gate Fold card, where it opens from the center like a gate. I chose blue and silver foil because platinum is the modern gift for a 20th anniversary and blue was the accent color at our wedding. I die-cut and embossed several silver foiled circles from a “20 YEARS” Embosslit die I found online. This specific die is retired, but you could use numeric dies to achieve this look. I then cut larger blue foil stitched circles and silver scallop circles. The circles were then layered and adhered together. I kept it fairly simple, as it was a masculine card, but wanted it to sparkle. I had clear adhesive stars, but I wanted them to pop. So, I colored them with Copic alcohol markers, let dry for a minute, and adhered some to the front of the card and a few more to the inside too! And added a light blue cardstock to the inside with an Anniversary sentiment to finish it up.